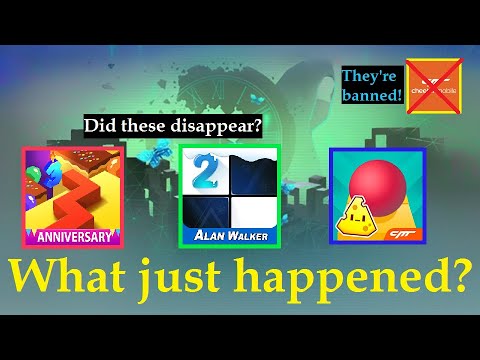 This is a summary of the events that have been going on the few two days with Rolling Sky, and other Cheetah Mobile Apps like Dancing Line, and Piano Tiles 2, which also are very popular games; this video is supposed to give informative if you don’t know anything about it, so if you already know all the info about this topic, i don’t really suggest you this video

I used my voice, it’s probably the ONLY SINGLE TIME i might do it; it was Faster to use it rather than editing the video with text, as i was supposed to upload this as fast as i could, specially because the last days i haven’t been able to edit videos due to school, but that’s #off-topic; i’m also sick right now, so that’s why my voice sounds somewhat weird (English is not my native language, so please pardon me for any mistake i did while pronouncing the words)

What’s the reason behind all of this?
This whole thing is due do AD fraud, which means they scam others who puts ads on their games, on this case Rolling Sky and Dancing Line, etc, and gaining extra revenue that they don’t deserve, they were warned on November 2018 but since they didn’t do anything about it, they banned the entire company from the play store, so this is like the punish for them

Will these games disappear from Google Play forever?
Right at this moment, the developers of these games hadn’t replied, as long as i know, so what’s the destinity of these games is still unknown, so the only thing we can do for now is to wait to see what happens

So, in conclusion, every app published by Cheetah Mobile is now deleted from the Google Play Store, and while we don’t know what goes next, they should at least do something, because these are popular games, and also they aren’t listed on the suspicious apps list, so that means that the games are literally clean, which means the developers can go to another company, or something like that, so in my opinion, if you are interested on what goes next, you shouldn’t worry too much about the games, but still be alert for whatever they do (I don’t plan to do another video about these things unless it’s really important)

If you want the APK from Rolling Sky (which gets updated through time) join Rolling Lounge:
(I’m not sure how to get the other apps though, you can download Piano Tiles 2 from APKPure since it doesn’t get updates, but for Dancing Line i’m not sure since i don’t play it even if i want to)

Author adminPosted on May 26, 2020
This video will show you how to download and install the full version of Battlefield 4 (also known as BF4) for free on Windows...
Read More