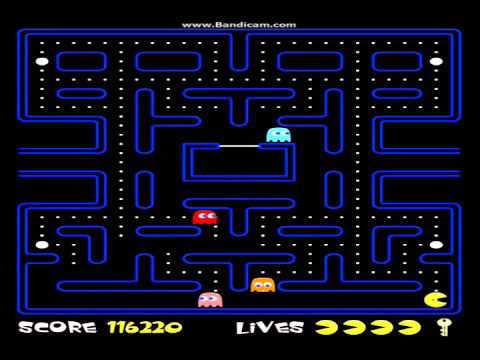 Windows Movie Maker made the level look weird. I finally reached a 200000 score. That and beating a level where the power pellet stops working with no death, was my goal in this game. I didn’t beat any of the no power pellet levels without dying in the video though, but I have done it before. I paused in the video, because Bandicam can only record up to ten minutes, so I was paying attention to the timer, while playing. There’s a lot of differences between this flash version and the real Pacman arcade game.

1. You can hold up to five lives and you will keep gaining another one, for every 20000 score. It takes four keys to gain an extra life. You’re gonna want that to keep appearing.

2. Fruits can appear more than two times and they appear at random or never. There are times when you beat a level and the fruit didn’t show up.

3. You and the ghost move at the same speed when you’re eating pellets.

4. Ghosts will not slow down in the tunnel, that takes you to the other side.

5. After being eaten, ghosts will leave the ghost house faster than the arcade version.

7. Ghosts move at random and have no patterns.

8. The Galaxian was replaced by a banana.

9. There’s no scatter mode so ghosts will never turn around.

10. Pacman can’t make sharp turns. Turning slows him down instead.