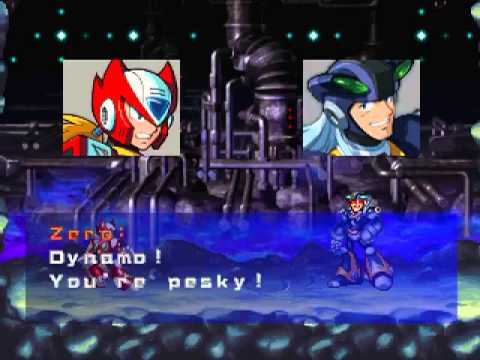 Mega Man X6, known as Rockman X6 in Japan, is a video game developed by Capcom. It is the sixth main entry in the Mega Man X series. The game was first released on the PlayStation in Japan on November 29, 2001 and was later made available in both North America and Europe.

The plot of Mega Man X6 takes place during the 22nd century where humans and intelligent androids called “Reploids” live together. The game follows shortly after the events of Mega Man X5 in which planet Earth was devastated by an attack by the “Maverick” leader Sigma and the protagonist Zero sacrificed his own life to save
it. As the world recovers, a Maverick known only as the “Zero Nightmare” has begun spreading chaos. Zero’s comrade Mega Man X, curious of its name, seeks out this new threat. Like past games in the series, Mega Man X6 is an action-platformer in which the player tackles a series of stages and adds the unique weapon of each boss
to X’s arsenal.

Prominent series artist and producer Keiji Inafune was not involved in the game’s production, as he had intended the fifth installment in the series to be the last with Zero’s death.

MORE COMMENT: People say that Megaman X7 is the worst game in the X series because of the botched attempt to make it 3D and expand out of it’s platforming spectrum, well those bastards have never played X6 or complained
about the insane level design, the rushed gameplay or the massive retcons it had destroying the impact that X5 had on the franchise.

The Nightmare System is one of the most frustrating things Capcom has ever produced for a gaming system… it wasn’t that bad when you had 16 hours to stop the colony from falling because there was a sense of urgency that helped you play better but Nightmare System takes the cake because it introduces gameplay elements that hampen, hinder and basically annoy the hell out of you and you can’t do anything about it because it’s there in your face and you have to work around it in order to get everything.

The game starts you off as X with Zero’s Saber but I unlocked Zero as soon as I could so I can get the best ending and then starting off by defeating the Investigators as X, I then alternate between X and Zero to clean up the items and defeating Dynamo 4 times each, then I used X in the first Gate level followed by Zero defeating High Max and Gate as I felt it was appropriate and then X kills off Sigma for good which Zero did the same as
a bonus bit.

The soundtrack however is the only thing GOOD about this game as it features a few remixes from older X titles that everyone will know but other than that, no matter how you feel when you see this video but if you get angry from watching this, remember I’m the one that had to play this 3 times just to get everything right so my mood after playing this is a bit HIGH!

Overall this was a decent way to end the X series as Kenji Inafune reworked the X timeline before he left Capcom to be X1, X2, X3, X4, X5 and X6 whilst putting X7 and X8 as non-canon… thus I can’t work with them.

This longplay is dedicated to the memory of Ken the Robot Dog for he still remains M.I.A 🙁

Author adminPosted on May 28, 2020
Hello Guys! In this video i have shown that how to download and install a universal joystick driver, which works on almost every joystick...
Read More